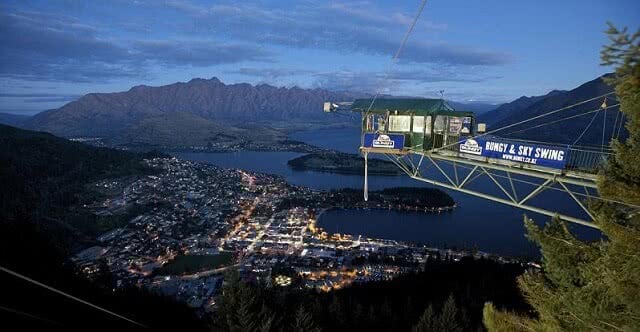 Queenstown is undoubtedly one of the best places in the world to visit if you’re an adventure junkie. Known as the adventure capital of New Zealand (and quite possibly the world), Queenstown has been raising the pulses of locals and visitors alike since the 1960s when jet boating first arrived to the city. Since then they have moved things up a notch or two in the adventure activity stakes. In addition to jet boating, two of the biggest thrill activities you can get involved with are bungy jumping and canyon swinging – the names of these activities alone suggest danger and excitement in equal measures!

Synonymous with bungy in New Zealand is AJ Hackett. Ever since his daring (and highly illegal!) bungy jump off the Eiffel Tower in 1987, AJ Hackett has been the biggest name associated with bungy jumping around the world. Shortly after that PR stunt, he opened the first ever commercial bungy operation at the Kawarau Bridge and the rest is history. Since then, bungy has gone from strength to strength in New Zealand and across the world but Queenstown still remains the spiritual home of bungy. The good news for anyone wanting to give bungying a go is that AJ Hackett is a GO Play partner so if you book with GO Rentals, there are a number of discounts you can score.

At the moment due to COVID-19’s impact on New Zealand’s Tourism industry, many operators are currently offering crazy cheap deals on their activities to encourage people to get out and explore their own backyard! While our GO Play program will offer our discounts all year round, if you’re looking to get out and about in the next few months (which we highly recommend you do!), then head over to AJ Hackett’s website to check out what insane deals they’re offering on their activities – you just might find something you can’t pass up!

Here’s a rundown of some of the bungy and canyon swing activities and where you can use your GO Play card! 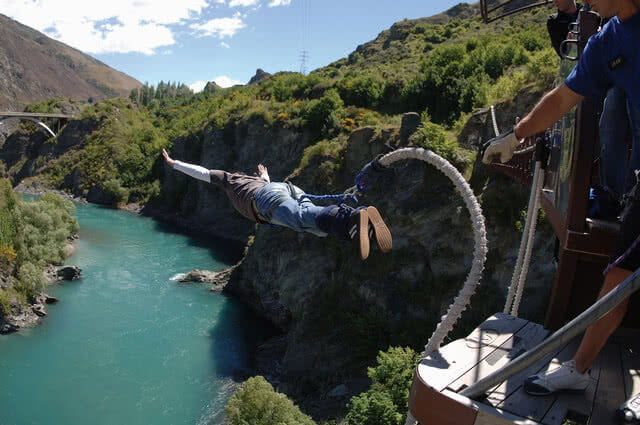 If you’re down in Queenstown then a trip to the Kawarau Bungy Centre is a must. This is the World Home of Bungy and the birthplace of the adventurous spirit that defines Queenstown’s character. Whether you decide to take the plunge or not, it’s a great place to head to watch people voluntarily throw themselves off the bridge, tied to a long elastic cord. At the centre, you can learn more about the history of bungy as well as enjoying a drink in the café. If you do fancy taking the plunge, there are a couple of options at Kawarau:

Kawarau Bridge Bungy – this is a 43m bungy jump off the historic Kawarau Bridge and it’s also the home of Queenstown’s only tandem bungy. If you are feeling brave, water touches are available so prepare yourself for a dunking!

Kawarau Zipride – ideal for families, tour groups and conferences, the Kawarau Zipride is made up of 3 x 130m zip lines allowing for solo or tandem rides. The zip line can also take up to 6 people at once which is good fun if you want to do a group thing. Reaching speeds of up to 60mph you can choose how you zip – Superman style or maybe upside down!

Another must on a visit to Queenstown, The Ledge offers up some stunning panoramic views of Queenstown and is perhaps the most spectacular of the three Queenstown Bungy locations. Uniquely positioned at the top of the Skyline Gondola, The Ledge Bungy and Swing are not for the faint-hearted but they do epitomise the Kiwi spirit of adventure and ‘up-for-anything’ attitude. Again there are a couple of options at The Ledge:

The Ledge Bungy – situated 400m above Queenstown, The Ledge Bungy is Queenstown’s only freestyle bungy jump. The specially designed harnesses allow you to bungy your way – twist, flip, handstand or even ‘Matrix’ style!

The Ledge Swing – The Ledge Swing will push even the most hard-core swing fan to the limit. Destiny is in your own hands as the only way to start swinging is for you to pull the release cord – that’s a lot of pressure right there! Once you pull the cord you will be plummeted off into the sky 400m above Queenstown and if you can get past the screaming, make sure you enjoy the views! 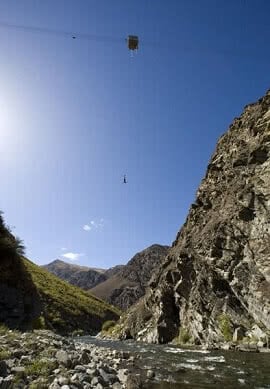 The final bungy location in Queenstown is The Nevis. This is the big one. The Nevis Bungy will leave you dangling on a high wire cable 134m above the valley floor and if that wasn’t enough, The Nevis is also home to the world’s biggest swing which will propel you through the gorge in a 300m arc. The Nevis takes its name from the UK’s biggest mountain and if you are going to tackle just one of the jumps, this one will give you the biggest bragging rights! Like the other two sites, there are a couple of options at The Nevis:

Nevis Bungy – The Nevis Bungy is New Zealand’s highest at 134m giving you 8.5 seconds of freefall that will have your heart coming out through your mouth! This is a once in a lifetime experience and all those who take on The Nevis have the right to tell people that they took on Queenstown’s biggest challenge and won!

The Nevis Swing – welcome to the world’s most famous swing. After being lifted up above the launch deck, suspended 160m above the canyon floor, you’re suddenly released and will find yourself swinging to the other side of the valley at a staggering 120mph. There are heaps of options for how you swing – backwards, upside down, tandem…it’s up to you. This is the big one when it comes to canyon swinging and The Nevis is an awesome place to get your kicks in Queenstown.

Check out all the latest deals on car rental in Queenstown. 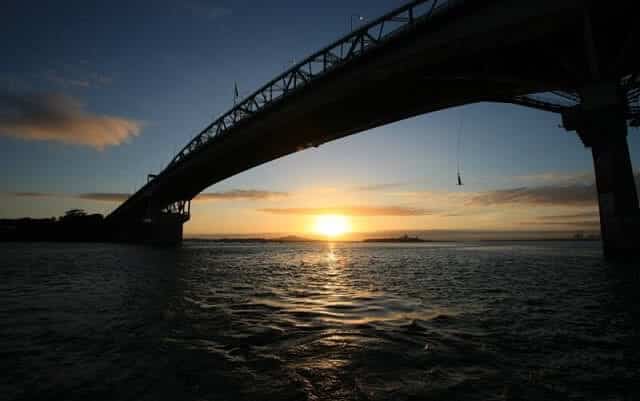 Whilst Queenstown may be the adventure capital of New Zealand, AJ Hackett also has a couple of big thrill activities in Auckland. Established in 2003, the Auckland Bridge Climb and Bungy is a great chance to do something pretty unique when you’re up in the City of Sails. Here are your three options with AJ Hackett in Auckland:

So this one may not be the most exhilarating of activities compared to a 120mph canyon swing, however it’s still a really cool thing to do on a visit to Auckland. The only way to climb the bridge is with AJ Hackett and the views once you get up there are spectacular. Watch the cars whizzing by below as you climb high above SH1 and enjoy the extensive commentary, pointing out all the key landmarks of the city.

Now this one is a bit more exciting! Head on up to AJ Hackett’s specially constructed pod on the Harbour Bridge before taking the 40m plunge. You choose how you jump – ankle tie, harness or tandem and this is New Zealand’s only ocean touch bungy jump which is pretty cool. The Bridge Bungy also gives you exclusive access to the Auckland Harbour Bridge so you get that as a little bonus.

If there’s one thing you might recognise from the Auckland cityscape, it’s the tallest tower in the country, the Sky Tower standing at a whopping 328 metres. The Sky Jump is your chance to plummet 192 metres of the height of the Sky Tower, reaching up to speeds of 85km an hour. This is definitely one for the bravest of the thrillseekers, and while you’re at the top you’ll get 360-degree views of Auckland, making for an unforgettable experience.

You can find out more about all of the above activities on the AJ Hackett website and make sure when you book direct, you let them know your GO Play card number to score your discounts!

Make sure you check out the deals on car rental at Auckland Airport and car hire in Auckland City today.