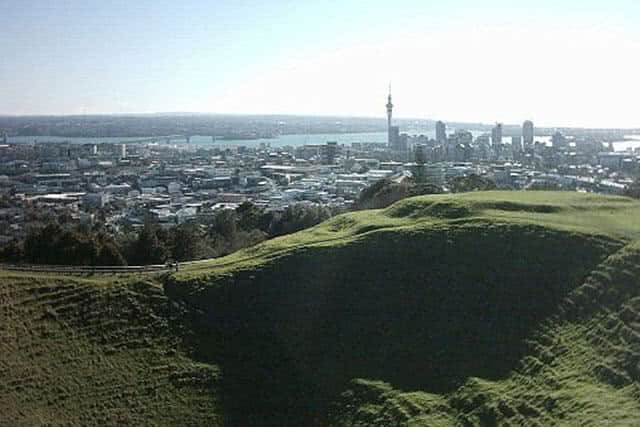 The mighty towering conical shapes of Auckland’s volcanoes can be seen right across the city and its environs. As recently as November 2011, four new volcanic craters were discovered below South Auckland, bringing the total number of volcanoes in the Auckland Volcanic Field to 55. Maori settlers established fortified villages on many of the volcanoes’ peaks and the majority of the city’s first permanent buildings were built using volcanic stone, basalt. A part of the Auckland landscape for hundreds of thousands of years, a trip to the city isn’t complete without a trek up at least one of its volcanic slopes. We’ve listed the top volcanoes below – lace up your boots and get hiking!

Mt Eden – As the highest volcano in the Auckland region, at almost 200 metres, Mt Eden offers stunning panoramic views over the city and its harbours. During the day, you can hike one of its many trails and gaze into the 50 metre deep crater but evening visits bring their own reward in the form of views of the city lit up like a Christmas tree. The volcano is easily reached by walking up Mount Eden Road or catching one of the city buses.

One Tree Hill – Once one of the biggest Maori settlements in New Zealand, One Tree Hill is now claimed to be the largest pre-historic earth fort in the world. Recognisable by the soaring obelisk at it peak, erected in recognition of the Maori population, its lush grassy slopes provide a wonderful place to escape the city and enjoy the views. A great way to reach this Auckland volcano is to take the coast to coast path which crosses the CBD and passes both Mt Eden and One Tree Hill.

Pukekaroro – This 62,000 year old volcano is home to the city’s oldest park, the Auckland Domain, which hosts open air concerts in the summer and is home to the brilliant Auckland War Memorial Museum and the Wintergarden. Playing fields, parkland and duck ponds now occupy the crater floor, while the museum is situated on the crater rim. It is perhaps the Auckland volcano that looks least like a volcano but is fascinating to witness the way nature adapts and is certainly also worth a visit for its beautiful parkland and the highly recommended museum.

Rangitoto Island – Auckland’s largest and youngest volcano erupted out of the sea roughly 600 years ago and its distinctive environment has spawned over 250 species of native trees and plants, including gigantic ferns, beautiful orchids and the largest pohutukawa forest in New Zealand. There are plenty of tracks on which to explore the island but the one that takes visitors to the peak should not be missed for the fantastic view that hikers are rewarded with at the top. Be sure to take plenty of water and wear sturdy shoes. The volcano is 10 km north of downtown Auckland and can be visited via a pleasant 20 minute ferry journey from Auckland Harbour.

Auckland’s violent past is evident from the many dormant and extinct volcanoes in the area so be sure to visit at least one – the views from the peaks are worth the trip alone.